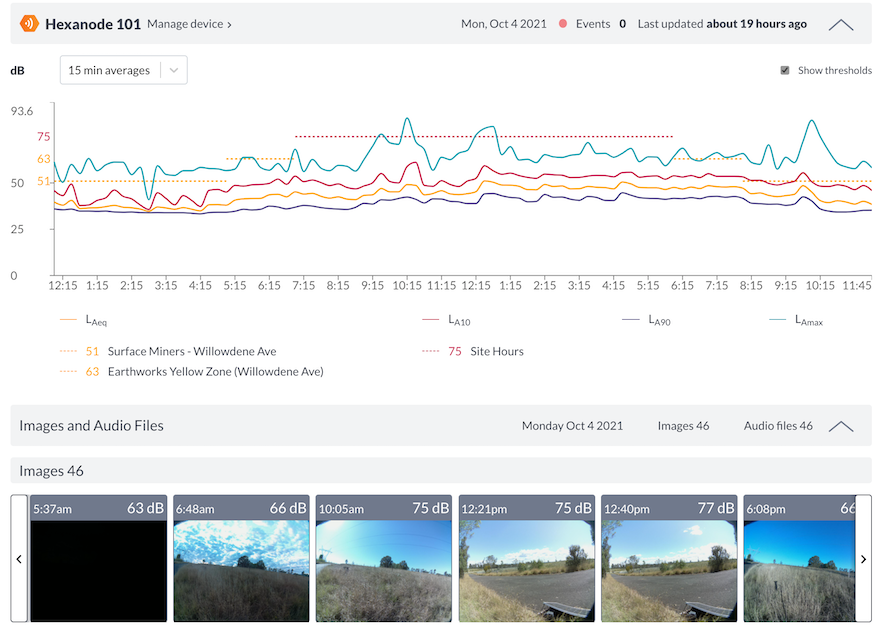 Capturing media (directional images & audio) has always been a key benefit of the SiteHive Hexanode, but until now the threshold at which media gets captured has typically been a static 75dB.

You can read more about media capture here.

Now though, all of your media thresholds are now set based on your Rule thresholds - making the media captured much more relevant to your site, 24x7.

For example, on the site shown below, a range or Rules are setup to capture the various night time, shoulder periods (5-7am, & 6-8pm) and daytime noise thresholds. As you can see though, there is media across the day, captured at the lower thresholds earlier in the day, then captured at higher thresholds during site hours.

Previously with the standard media threshold of 75dB, the chance of getting any images or audio overnight or during the shoulder periods was relatively low. Now however, with the media thresholds being set dynamically based on the thresholds in your rules, you can be confident that relevant media will be available whenever you have site events to investigate.

Something to note is that each device will check and update it's thresholds at 6am & 6pm, so if you're adding editing rules the impact may not be immediate.