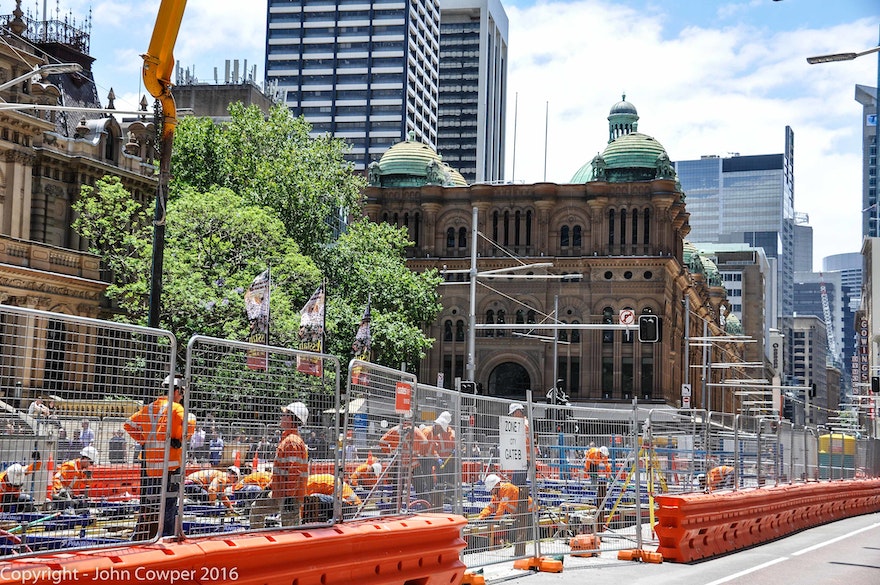 Managing construction dust is primarily about mitigating the impact of works on stakeholders. The main focus of dust monitoring is to identify any dust level increases, understand their cause, and take action to prevent or mitigate them. Visual observations and record keeping are usually the primary method of managing dust, supported by dust monitoring.

Many Construction Environmental Management Plans (CEMPs) have dust compliance rules in the form of time-based limits for PM2.5 and PM10 levels, typically covering days, weeks, months and/or years. The table below shows an example from Western Sydney Airport Bulk Earthworks (see references to NSW EPA & NEPM-AAQ below under Relevant Policy):

Compliance-based measurements are typically required to be undertaken using dust deposition gauges (DDGs), whereby samples taken over a period of time (usually a month) are sent to a lab to determine volume and type of dust over the previous period. The obvious downside of this approach is that any issues will only be identified weeks after they occurred, which doesn't enable proactive management to prevent issues occurring.

It is much more useful to know whether a site might exceed the dust limit in real time, as this allows action to be taken to prevent potential issues occurring. New technologies, such as optical particle counters (as used by SiteHive Hexanodes), make this possible and allow daily values to be calculated as often as required.

Real-time monitoring using this new technology allows management rules to be used throughout the day (e.g. rolling averages) to identify trends in the levels and enable remedial action before a dust event occurs. 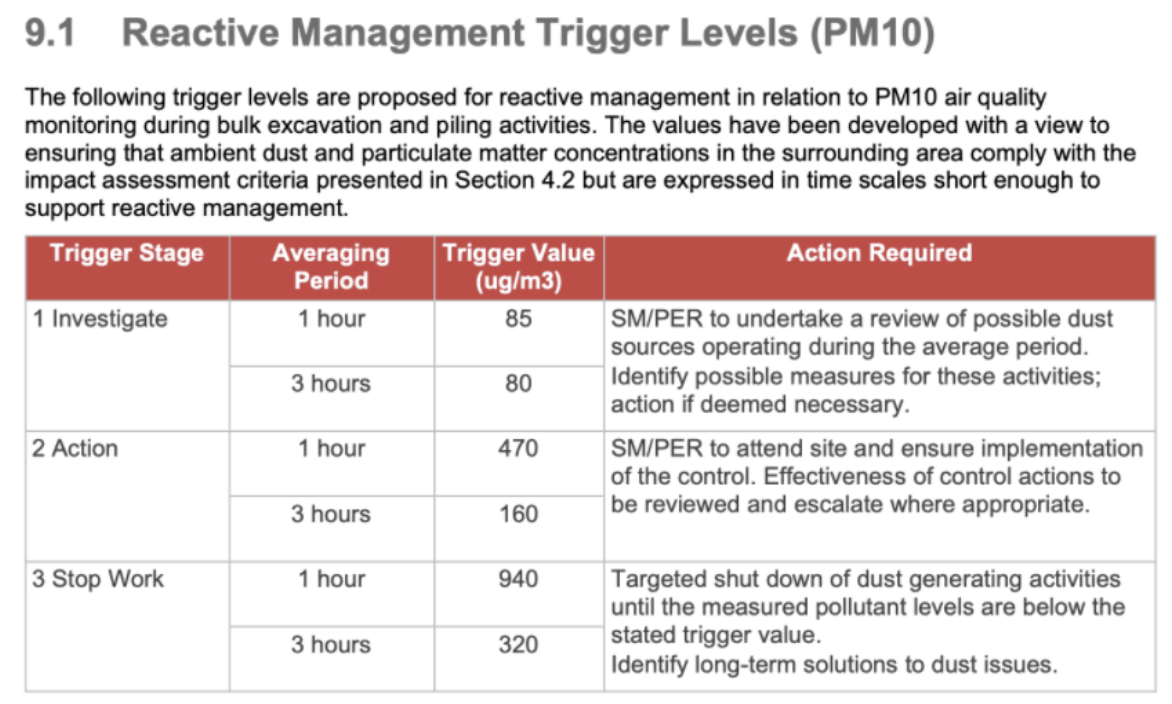 The methods used at these sites are TEOM (Tapered element oscillating microbalance), BAM (Beta attenuation monitoring ), or High/Low volume air samplers. All of these have filters that need maintaining/changing. These methods are also very expensive and usually require permanent facilities. For these reasons, they are not typically used for construction monitoring.

However, construction projects can access and use the data. SiteHive makes it really easy to access this data by adding the nearest government reference station to each project site automatically, so the ambient reference measurements can be compared directly with onsite measurements.

The below shows an example from SiteHive Reporting, showing on site dust monitoring and nearby EPA reference monitoring on the same graphs:

As reference grade stations are too large and expensive, the methods usually used for construction monitoring are outlined below.

Dust settles in a container over a defined period (usually 14 or 30 days) and is sent to a lab for analysis that usually provides reporting on volume, mass, and type of dust deposited.

The most commonly referred to method of dust sampling in the Australian and US standards is gravimetric sampling. This is a filter-based method, and gravimetric dust monitoring involves sampling a known volume of ambient air through a filter. The filters are sent to a lab to be weighed before and after exposure to determine the mass of particles. The collected dust sample is expressed as mass (mg) of dust per cubic meter (m3) of air.

Real-time monitoring differs from the other types of measurement in that it enables continuous and proactive monitoring of dust levels. It uses a variety of techniques (outlined below) that each have different price points and accuracy. The US EPA has run a number of field tests with emerging sensors, showcasing their performance against reference grade monitors: US EPA Evaluation of Emerging Air Sensor Performance. The following types of sensors are most often used for real-time construction monitoring.

Commercial real-time monitoring devices may include a combination of different light sensors. The relative costs of the different types of light sensors are identified by the $ ratings shown below.

$$$ Beta Attenuation Monitoring (BAM) is a widely-used air monitoring technique that uses the absorption of beta radiation by solid particles extracted from air flow. The main principle is based on a Bouguer (Lambert–Beer) law: the amount by which the flow of beta radiation (electrons) is attenuated by a solid is exponentially dependent on its mass, and not on any other feature (such as density, chemical composition or some optical or electrical properties) of the matter.

$$ Photometers (e.g., DustTrak, which also collects a gravimetric sample) measure light reflected at a specific angle, and nephelometers (e.g., pDR) measure light reflected over as wide a range of angles as possible. The DustTrak DRX is a combined photometer and optical counter, where a laser diode illuminates a sample stream and reflected light is directed onto a photodetector by a mirror. When properly calibrated the DustTrak DRX has <10% error in comparison to TEOM measurements (Wang et al., 2009).

$ Optical particle counters (e.g. Sensirion SPS30, Alphasense), measure the light scattered by individual particles carried in a sample air stream through a laser beam. These measurements are used to determine the particle size (which is related to the intensity of light scattered via a calibration based on Mie scattering theory) and particle number concentration. Particle mass loadings (PM1, PM2.5 and PM10) are then calculated from the particle size spectra and concentration data, assuming a particle density and refractive index (RI). The default settings (weighting index 2) for these

In the field, real-time monitors (e.g. optical particle counters) can be calibrated by co-locating instruments for a period of time, and by using a scaling factor (i.e., a calibration factor, sometimes called a K-Factor) or curve of best fit to adjust the measurements reported by the real-time monitors to match the gravimetric measurements. Typically, portable, low-volume air samplers are used to generate a K-Factor for cheaper, more portable devices such as optical particle counters.

Understanding the source of dust on your site can be a complex challenge, with local weather conditions often causing dust to be blown on and off site, impacting local stakeholders and communities. To make it easier to understand where dust is coming from, SiteHive shows indicative dust direction of arrival (DoA).

Taking inspiration from a traditional pollution rose, the SiteHive dust DoA plot shows the percentage of dust that has come from each direction, for the day so far.

Benefits of managing dust in SiteHive

- Lower-cost devices mean you can monitor at more locations

- Calculate direction of arrival of dust based on meteorological conditions

Kaiterra knowledge base, explaining context and methodology for how they measure pm2.5.

The standards in Australia are very specific to each method, and have not yet kept up with newer technology such as optical particle counters. If your management plan specifies that you need to comply with one of the standards below, then you must use that method. Where no standard is defined, or the management plan is more focused on real-time management, then optical particle counters are a great tool for the job.

Each state also typically has their own approved sampling methods, which overlap with the NEPM. For example the NSW EPA approved methods for the sampling and analysis of air pollutants and the Queensland Government Environment department summary of methods for sampling particulates.

Standards referenced by the NEPM:

TSP - Airborne particles up to about 100 micrometers in diameter are referred to as TSP (total suspended particles).