With SiteHive Hexanodes across your site, you not only know when noise and dust measurements are approaching, or over, relevant thresholds, you can also determine potential causes quickly using media (directional images and audio) captured by each SiteHive Hexanode.

Just because you're seeing images and audio on your dashboard though, it doesn't necessarily mean you're over any compliance limits.

SiteHive Hexanodes are always listening out for loud sounds, and the direction they came from, so that they capture media (images and audio files) in the direction of arrival of the sound source. This media allows you to understand and explain potential compliance events - but it's also useful for seeing and hearing what is happening across your site, whether you're over compliance levels or not.

The example below shows a site with no rules set up, but with lots of media captured to help the team understand site activities: 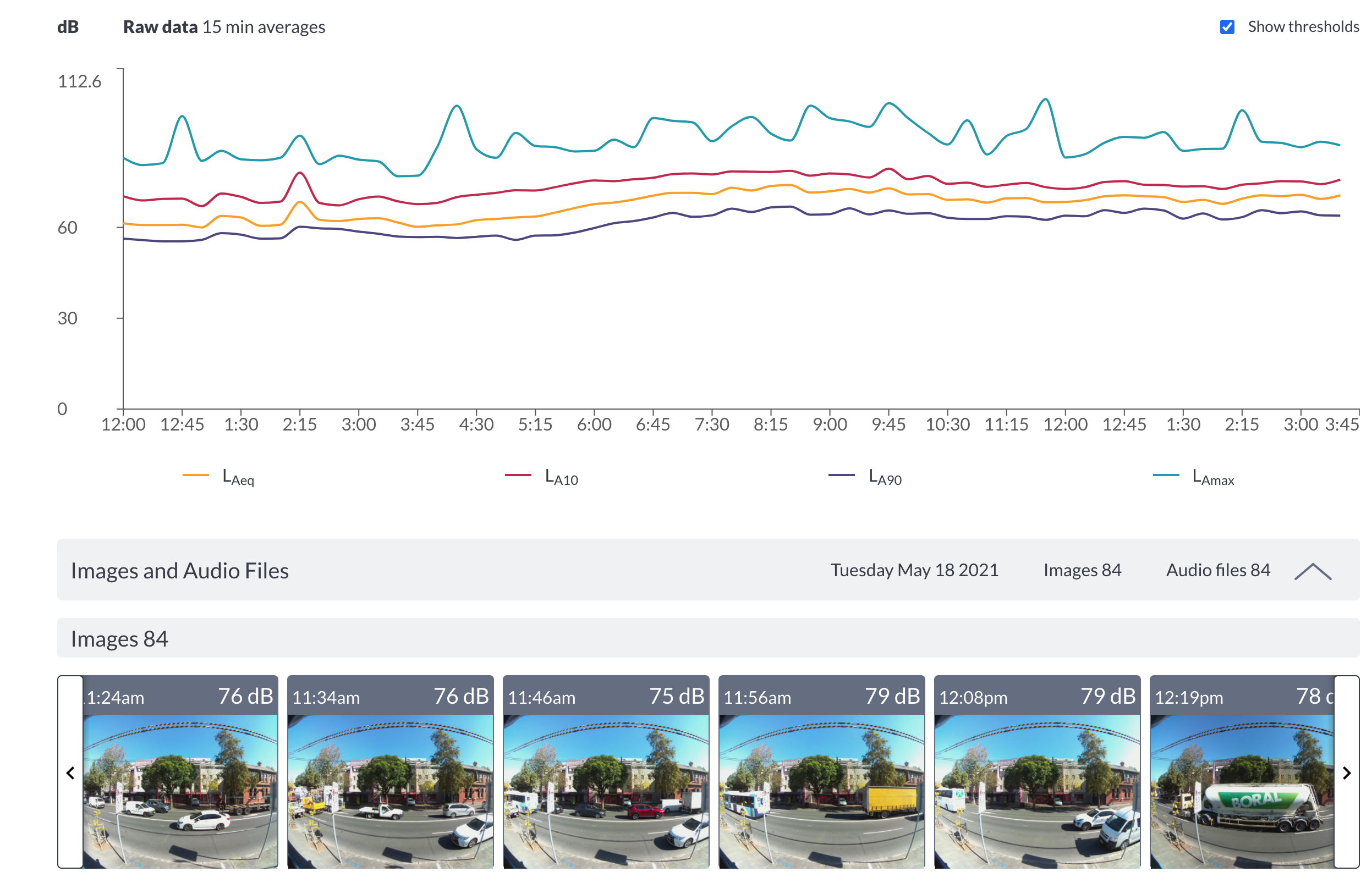 The media capture is triggered by sounds over a threshold (the default threshold is 75dB), but measured on a much shorter interval than the 15 minute compliance measurements the SiteHive Hexanode is also continuously monitoring. The reason for this is that a single, loud sound may not result in a high 15 minute LAeq noise level, but it could still generate a complaint or be of interest to the site team.

The images are captured by one of two wide-angle cameras on opposite sides of the SiteHive Hexanode, with the camera pointed closest to the source of the sound taking the picture. The 10-second audio files captured at the same time contain 5 seconds before and 5 seconds after the loud sound that triggered the capture. There is also a configurable delay between media capture, defaulted to 5 minutes. The picture below shows an image captured on site, with the specific direction of arrival of the sound clearly shown in the sound map next to the photo:

Setting up rules for compliance management

If you set up rules on your site (in Site Details), events will then be generated when your thresholds are exceeded. Once set up, rule thresholds will show as dotted lines on your SiteHive Dashboard graphs. The rules can be set for specific time periods - for example, the threshold may be different during normal working hours compared to after hours:

Each measurement taken by a SiteHive Hexanode will then be assessed against your thresholds, to determine if an event should be created to let you know that something may warrant your attention. When measurements are over the threshold, the events can be seen in the graph, or selected from the event reel below the graph for quick access:

The example below shows three images and three audio files, all captured during or adjacent to one event, based on a 15-minute noise measurement that was over the 75dB noise threshold:

All the media is also available in SiteHive Events, where you can quickly explain and classify your events as part of your proactive management processes. Remember too that you can also set up notifications via email or sms for your rules, so you are notified directly and immediately if thresholds are crossed.